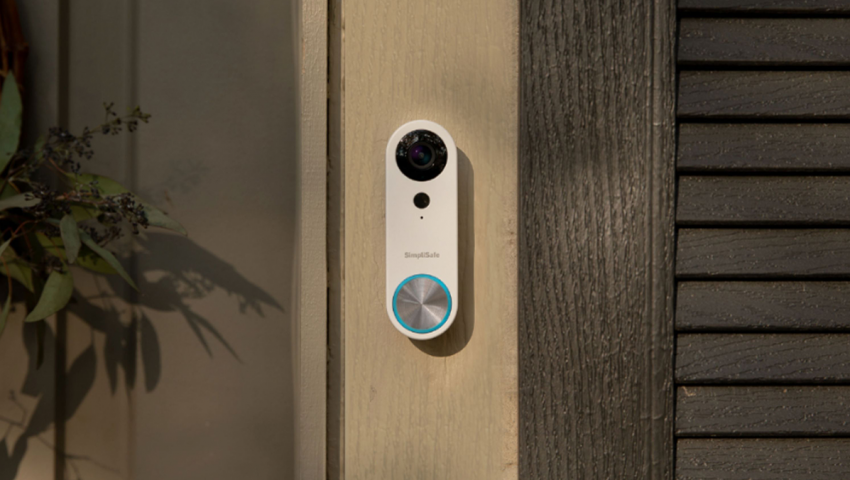 Recently I had a client who ordered a Simplisafe Video Doorbell. I went to install it, followed instructions and got it setup in no time. Two days later, he called me and said it was making a buzzing noise or a hum. I found out that Simplisafe is familiar with this and offers an extra part that is not normally included called a “Chime Connector.”

I purchased the Utilitech doorbell package from Lowes that has two standard doorbell buttons, a mechanical doorbell chime, and a standard transformer (10VA). The buzz came later and thought all we needed was to add the Chime Connector and call it a day. When it arrived, I installed it but the buzz was still there. I also read forums where the transformer was not the correct one and to buy a Hampton Bay doorbell transformer that is “made” for smart video doorbells (30VA). This was installed and the buzz continued.

What was different from other installs I have done is the builder had two wires (red and white) running from the transformer to the door chime. Then had another two wires (red and white) running from the chime to the doorbell. In the mechanical doorbell standard setup, they just connected the red wires together and the white wires together. Well now that I had a buzz in the system, I had exhausted all resources and resulted in calling Simplisafe support. After going over all connections with tech #1, it still had no resolve. Their solution was it could be a bad Chime Connector but to our surprise, Simplisafe had already shipped two Chime Connectors by accident and I had already tried both. I tested the base plate and still received 16.2V which Simplisafe said was their median voltage and should be acceptable. We ended up with tech#2 and they shipped us a new video doorbell thinking that it could be a faulty unit.

When that arrived, I realized that we did not completely disconnect the video doorbell and see if the buzzing continued. I tried that and sure enough, the buzz continued which meant it was the door chime or the transformer. I went to Home Depot to search for another door chime to try and “match” the 30VA from the transformer. However they did not have any 30VA door chime and all they had was the standard 16VA mechanical door chime. I purchased a new door chime that was the same price as the whole Utilitech package. Also, I purchased another 3-way transformer that has 10VA, 16VA, and 24VA.

Now I started the process over with 24VA, it buzzed. Since the door chime states that it was a 16VA door chime, I switched to 16VA and NO BUZZING!!! I connected the Chime Connector just in case and sealed it up. This fixed the problem for me. I usually deal with only two wires to the door chime and not two PAIRS.

Hopefully this solution helps someone out there if you run into the same issue. We shipped the new video doorbell back without even opening it and returned the Utilitech garbage.

Lincoln Scott
23:35 16 Feb 22
I called Keith on short notice to see if he could help with a laptop problem. I had asked another very knowledgeable IT person who, after trying to determine the problem, couldn't help in short order. Keith called me back immediately and was able to determine the problem and made the repair fairly quickly, although it was not a common issue.Keith was very helpful and pleasant and I will be using his services the next time I need IT assistance. Recommended!

Brandon Cornwell
19:40 14 Feb 22
Very reliable, knowledgeable, and great prices. I trust Keith with all of my technology issues/questions.

Angie Walters
23:32 14 Dec 21
Keith was super respectful of my computer knowledge and lack of knowledge. He had multiple options for accomplishing what I needed and was really fast at taking care of the issues. Best part was he followed up with an email for additional tasks I could do to improve my speed and when I didn't respond, a week later he followed up again to make sure everything was going okay. Highly recommend!!

Adam Tate
02:58 24 Nov 21
Keith did great work and in a timely manner. Will definitely go back for any computer or IT needs. Highly recommend

Nanci Bauman
02:21 13 Nov 21
I used Keith to get my POS in compliance for work. He handled everything quickly, efficiently, and fixed my issues super fast. I can't recommend him enough and I'll be using him for any future technical problems. Thanks again!

ken cole
22:55 09 Sep 21
Thanks for fast response & helping me network my home computers, plotter, and printer. I was convinced you would need to make a visit to my home, but everything was remotely done. Much appreciated.

Jeanne Peel
18:25 20 Feb 21
I was nervous about taking my laptop to someone I didn't know, but Keith was great! He called me back immediately and communicated regularly while he had my device, he's very personable and professional, and my computer was fixed in no time at a great price, plus he was helpful with extra questions I had! Keith is now my go-to computer guy and I'll be calling him again. Highly recommended!

Debra Wingo
03:53 12 Mar 19
I am please to recommend Keith Jones of Keith Jones-IT. Our real estate firm has used Keith for several years for a variety of services. He provides all of our IT work for the real estate office, repair to agents cell phones and laptops, drone photography for our clients listings and even installs electronics and routers in our vacation rentals. Keith is always eager to help in any way and is just a phone call away for quick solutions to our questions. Keith is trustworthy, dependable and timely. FIVE STARS!!!!
‹
›

Get the best VPN to keep you secure!